“Don’t be scared to deeply trust your intuition.”

Taban Shoresh’s story is so remarkable that it reads like a film. A true WYLDE Woman who has escaped adversity time and time again, Taban is a lesson in optimism and endless courage. From escaping a Saddam Hussein-ruled Kurdistan as a young child to fighting illness as an adult, Taban has experienced more than most. Yet her passion and hopefulness have led her to a position of strength. Her foundation, The Lotus Flower, has helped over 30,000 women and children. Here, Taban talks to us about facing death, starting a new life, and the driving force behind her work today. 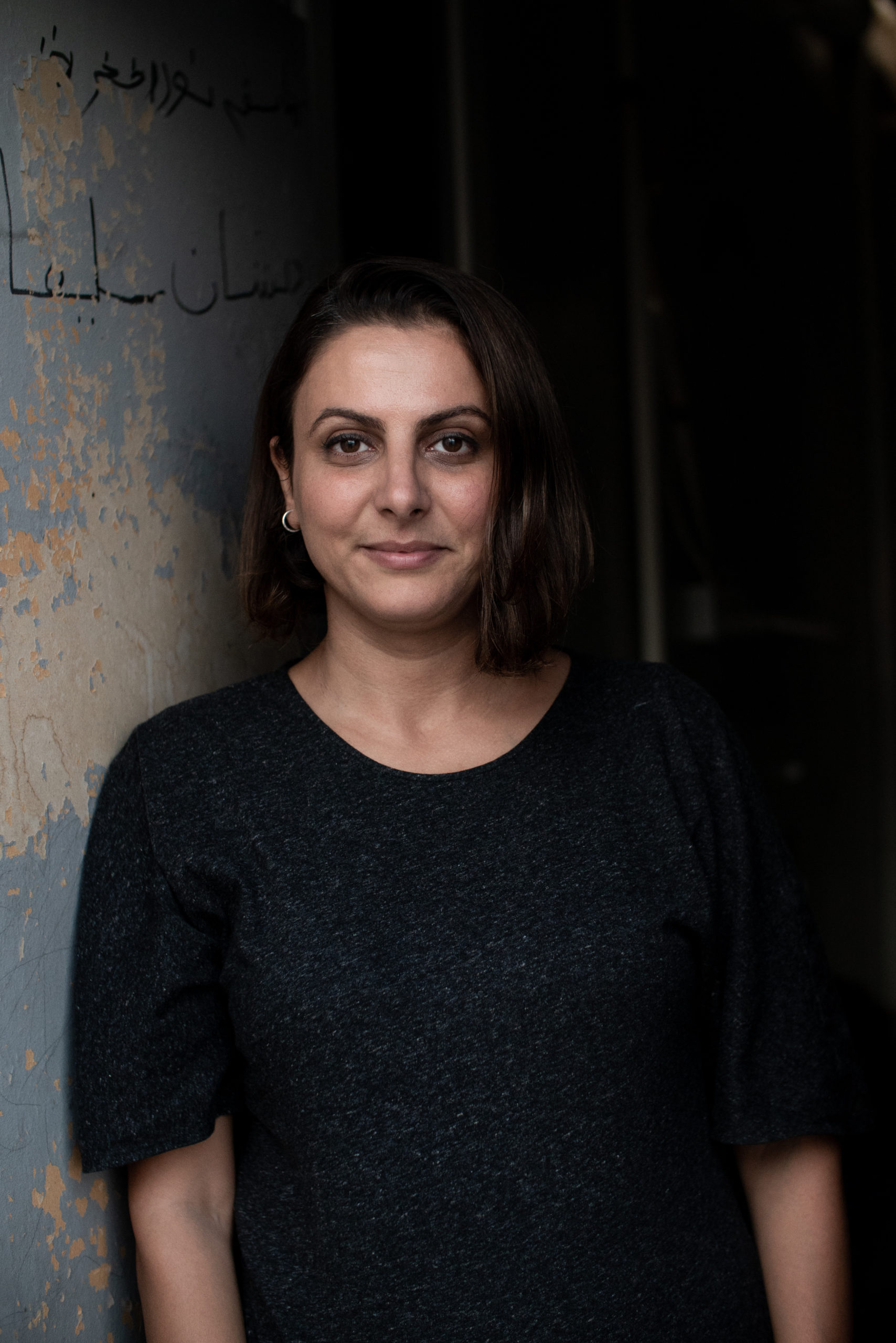 On being captured and put in prison.

“When I was four, Saddam Hussein carried out the Anfal campaign – basically a genocide campaign – in Kurdistan. Any Kurds who were rising up and fighting for their rights were automatically added to the most-wanted list and this included my dad. My mum used to visit my dad who was living in the mountains in secret but eventually it became too dangerous. The day after she stopped, soldiers showed up at my grandmother’s house, where we were staying. They captured me, my mum, and both sets of my grandparents. They took us to prison and interrogated all of the adults to try and get information about my dad, but none of them gave anything away. Then they took us to a second prison.”

On how she escaped being buried alive.

“After about three weeks, some names were called out and we were on that list. That list named all of the families who were about to be buried alive. There were buses to take us to the mass grave – of which there are a lot across Iraq. At that time, you had Kurds working for Saddam Hussein and Kurds working to rescue Kurds like us. Our bus driver switched and the new driver, who was there to take us to the graves, was actually there to rescue us. He opened the doors of the bus and told us that we had to pretend that we were dead from now on because the next time they captured us, they would kill us. We ended up walking to a road and stopping a taxi. Amazingly, the driver was an old student of my grandad’s. He took us to my mother’s stepsister’s house, as it was the least likely place that we would be found.”

“He opened the doors of the bus and told us that we had to pretend that we were dead from now on because the next time they captured us, they would kill us”

On being rescued by Amnesty International.

“We stayed with my mum’s stepsister for three months then fled from village to village helped by underground networks. Not only were my family trying to escape because we were on Saddam Hussein’s most-wanted list, but Iran and Iraq were at war so we were literally dodging bullets. Eventually, we were smuggled into Iran on horseback at night. My dad was still in Kurdistan and planned to follow us a few weeks later, but Saddam Hussein had hired a husband and wife team to poison a group of men, and sadly my dad was amongst them. He drank enough of the poison to be paralysed and left critically ill. Thankfully, he and two other men were taken to Iran where Amnesty International then flew him to the UK for medical treatment.”

On starting a new life in the UK.

“After a year in Iran, we finally got our papers to come and live in England. It was our first time on a plane and our first-time seeing people from different backgrounds, different ethnic groups and different skin tones. It was a whole new world. Things like the tube were so surreal and overwhelming. But we picked up English very quickly and life became what life is here.”

On how her childhood has affected her adulthood.

“I think I was too young, at the time, to really internalise what was going on. But as an adult, what happened to me has come out in many different ways. I remember as a child, I knew that something bad was happening and that I needed to be invisible and as a result, I was a very quiet child. From day one, my body has been in fight or flight mode, because that’s all it understands. It doesn’t know rest only danger. I believe that’s come out in my illness in fighting Crohn’s Disease. Recently, after one of my surgeries, my wound looked like a shotgun wound, which brought back a memory of a man we saw on the side of the road who had been shot to death. Memories can be triggered and come out in many different ways.”

“From day one, my body has been in fight or flight mode, because that’s all it understands. It doesn’t know rest only danger.”

On how what she went through has given her purpose.

“I’ve gone through a lot of healing, which is why I think I can talk about what we went through. My mum doesn’t remember a lot of it. I think the trauma of it has blocked it from her mind. The work I do today is supporting women and girls impacted by conflict. I don’t just talk about what I went through for the sake of it, there’s a purpose and that makes it easier.”

On quitting her job to go back to Kurdistan.

“I worked as a project manager at an asset management firm because I needed a job to support my son. In April 2014, I was asked to do a speech at the House of Lords on Genocide Remembrance Day. I was nervous because the talk was in front of 200 people, but the universe made it happen. I told my story and got a standing ovation. That was the first time I realised my past had an impact and that I had to do something connected to my story. I didn’t have anyone to turn to or ask for advice, so I asked the CEO of the company I worked for. Up to that point I’d never even had a meeting with him, but he knew all about the talk I’d given, how well it had gone and he told me that I was too special for my corner desk, and that I needed to go and fly. I was so taken aback; he saw something in me that I couldn’t yet. Just as I handed in my notice, ISIS had gone into Kurdistan and I was offered a job at a local foundation there. When I arrived, I had a call from a BBC journalist who told me that he needed to join me on the helicopter to report on the people stuck on Mount Sinjar. I had no idea what he was talking about. I had just arrived from London and I hadn’t heard anything of this crisis, so I was certain that no one else had either. I didn’t know about the 30,000 people stuck on a mountain, hemmed in by a terrorist organisation. Getting on that helicopter completely changed me: I’ve never seen so many people so desperate to live. It was so difficult to witness.” 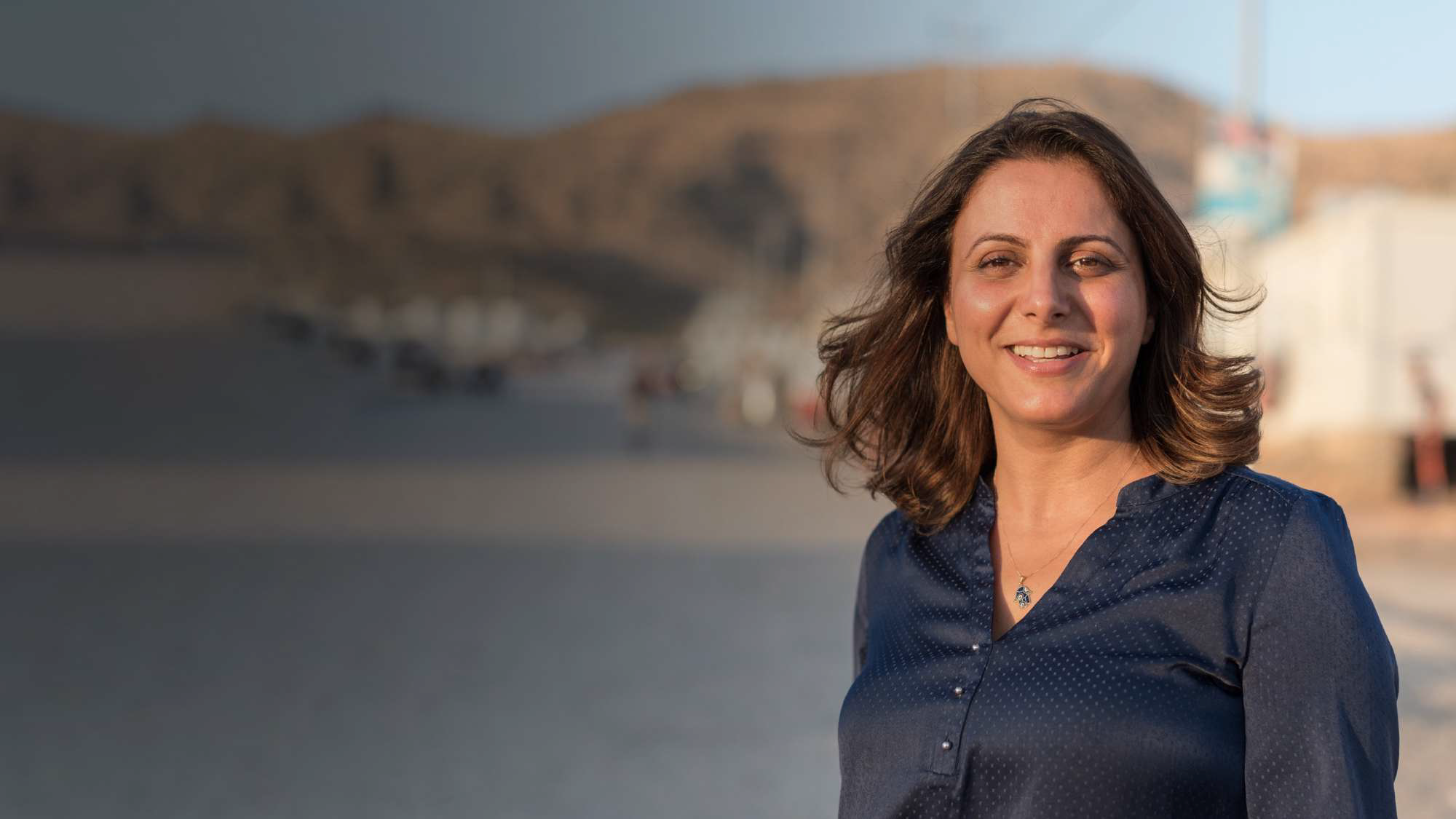 On starting The Lotus Flower.

“I spent 15 months with that organisation at the very front line. It was really intense. When I came back to the UK, it took me three months to adjust. I knew I had to do something to help, I couldn’t go back to a normal job. That’s when I set up The Lotus Flower from my living room. My project management experience helped because I knew all of the elements that I had to bring in like the structure and the branding. I needed money, too, to prove that the foundation was needed. I raised £25k which helped us start the project. The space that we were going to create was the most important thing because there was nowhere for the women and girls in these camps in Kurdistan to go. The men and boys had cafés and restaurants to go to that women weren’t allowed into. We needed a safe space for these women to learn, heal and grow.”

“We’ve gone from one project with just me on my own, to having 30 staff members and a few of us internationally. It’s just phenomenal. to see the growth and how we’ve impacted over 30,000 women and girls to date.”

On what The Lotus Flower offers.

“Since 2016, we’ve had various projects; we’ve got pillars of education, livelihood, mental health, wellbeing, human rights and peace building. We’ve got a women’s business incubator where women can start their own projects within the camp. We’ve got baking sisters, boxing sisters, sewing sisters. There’s a café, supermarkets, and hairdressers. We provide therapists for those who need them. We’ve started working with men and boys to stop systemic gender-based violence and we’ve started an initiative called Peace Sisters where we are training mediators from the ground up at the community level so that their voices can be heard.  We’ve gone from one project with just me on my own, to having 30 staff members and a few of us internationally. It’s just phenomenal. to see the growth and how we’ve impacted over 30,000 women and girls to date.”

On the piece of advice, she’d give her younger self.

“Don’t be scared to deeply trust your intuition. I do everything by intuition; I can make a massive decision by just knowing if it’s right or wrong. There’s something innate in us all, but often we’re scared to trust it. I’ve had so many lucky escapes from death that I trust that there’s something out there protecting me.” 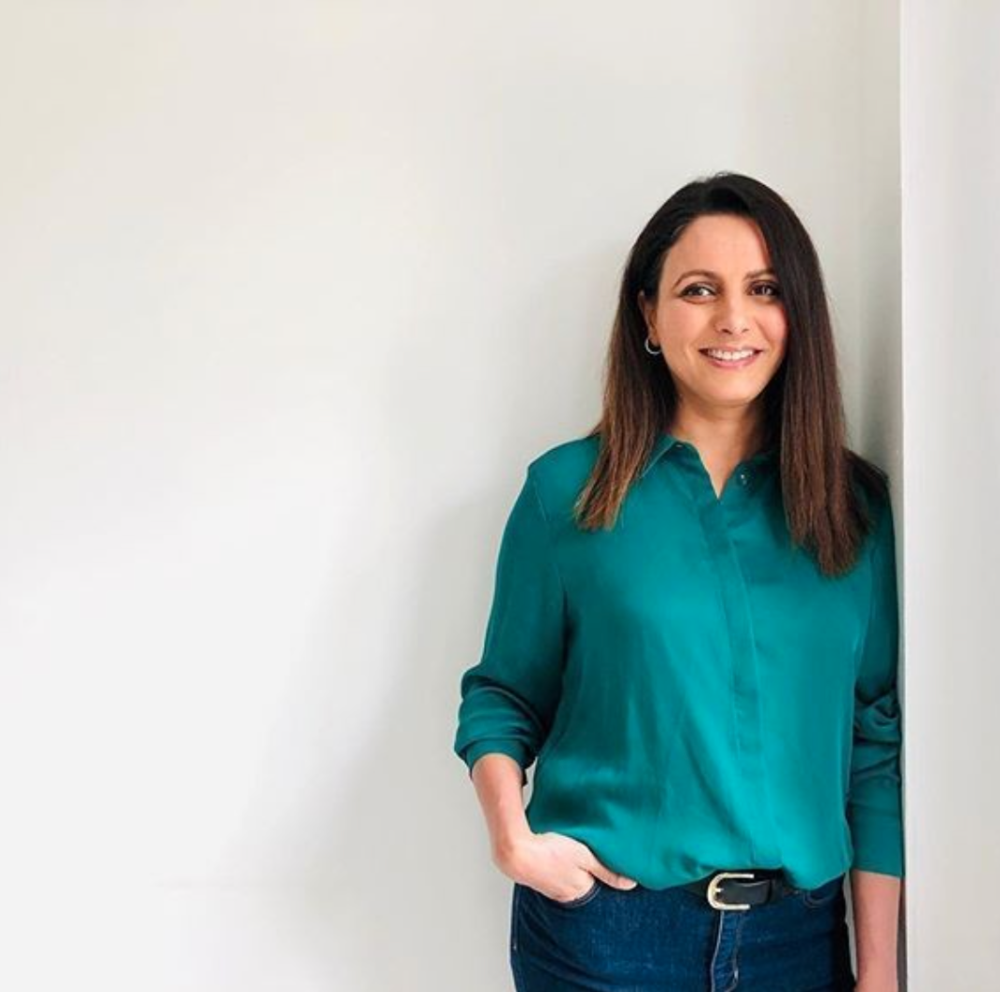 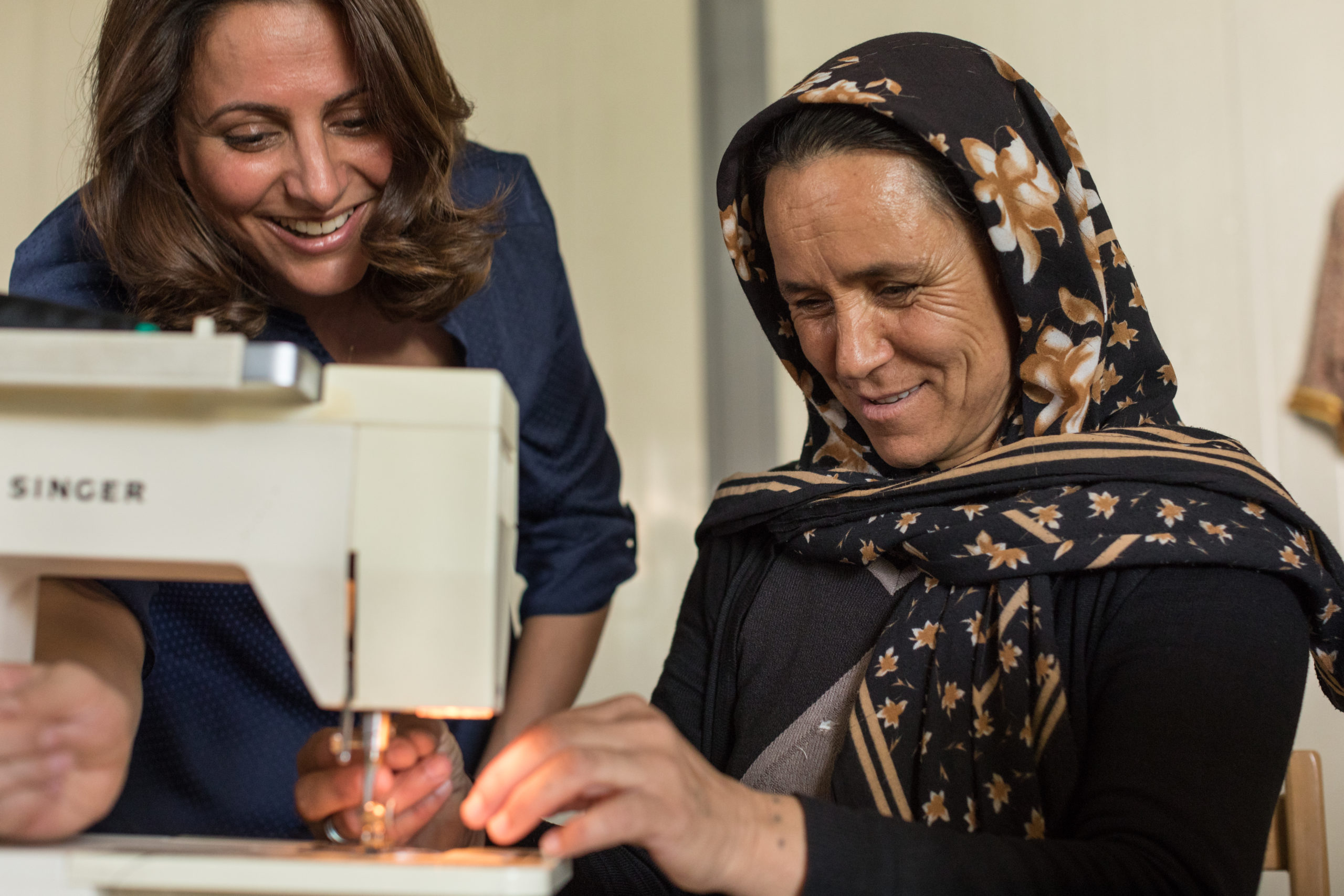 On the power of trusting yourself.

“Everything I’ve experienced has taught me the power of resilience. From my childhood, I’ve learnt to trust myself to make the right decision, to make the change. It’s all about trust, resilience and intuition.”

On how to get involved.

“Fundraising has been massively affected by COVID-19: we just about survived last year. Now, we’re starting to really look at those who can support us long term. We’ve proven our concept and that the foundation is needed, and now we need the right supporters to really back us, to keep it sustainable and to keep it going for a long time. There are so many different ways that people can support us, whether that’s volunteering your skills or a becoming a brand partner that can help us bring about a long-term partnership. We’re always looking for brands and individuals that would be suitably aligned to The Lotus Flower. Donating is the biggest way to help but spreading the word and getting it out there is so helpful.”

The Lotus Flower works directly with the local community in Kurdistan to create a safe social space for women and girls. You can support the charity by visiting thelotusflower.org and following @tabanshoresh and @thelotusf on Instagram.