Elizabeth Hutton is a force to be reckoned with. A true WYLDE Woman, she has overcome some of the most challenging moments that life can throw at you, such as being diagnosed with cancer aged 36 and going through a stillbirth with her son, Toby. But through adversity came optimism and strength and Elizabeth – who became CEO of stillbirth charity Kicks Count in 2013 – is truly a lesson in counting life’s blessings. We sat down with her to discuss her role at Kicks Count, what she’s learnt from facing some of the toughest moments any of us will ever go through, and why knowledge is always power. 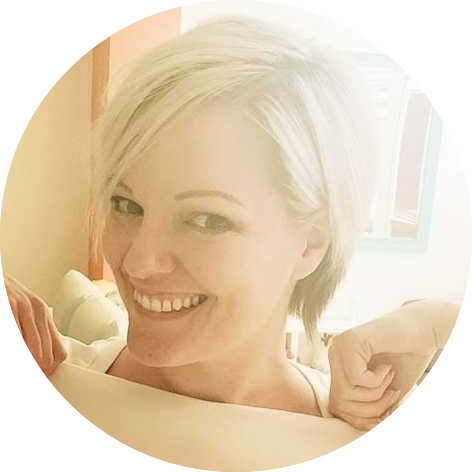 On lessons to her younger self

“My biggest lesson would be to keep going through the tough bits. Just keep going, because it does get better. My 18 year old self wouldn’t have believed me, but hey! I have a 13 year old daughter, and I keep saying things like that to her. Right now it seems bad, but it does get better.”

On life before Kicks Count

“Before I had my stillbirth and came across Kicks Count, I was doing all kinds of different things – including working in childcare and then as an admin for the police, where I ended up staying for 7 years. I absolutely loved it and was there until the stillbirth of my son, Toby. It didn’t feel like the right job to go back to, so that’s when I started working for Kicks Count.”

On connecting with charity after a stillbirth

“Before it happened to me, I really didn’t know anything about stillbirth or really anything about what could potentially go wrong in pregnancy. I’d had several miscarriages before I had my first daughter, but I wasn’t aware of what could go wrong later. I certainly hadn’t heard of any of the charities but after I lost Toby, I knew that I wanted to do something. I looked at all sorts of things, like being a sonographer and a midwife, before I came across Count The Kicks, as it was known as then.

Everything seemed to align once I discovered that the charity was run by Sophia, who was a mum living locally to me. When I met her, she wanted to close up shop because running it alone was taking a toll on her. But having deeply connected with what Count The Kicks was doing and knowing how important the work was, I desperately wanted her to keep it open. So she did, and I became CEO in 2013.” 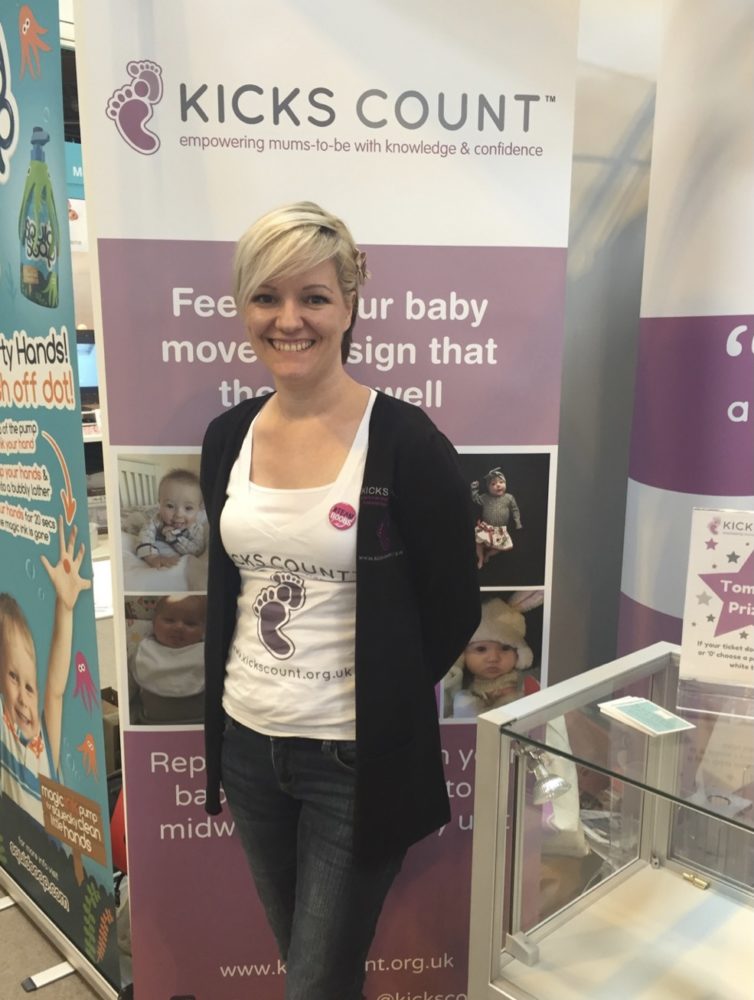 “We changed our name from Count The Kicks to Kicks Count because simply counting the kicks isn’t quite the right message. What we wanted to communicate is that it’s about getting to know what’s normal for your baby, which does often involve counting, but there’s a lot of misinformation out there. People say that you should get 10 kicks in 2 hours, or that your baby slows down when it’s getting ready to be born. These things simply aren’t true, so the message that we focus on is that if you notice a change in your baby’s regular movements, you should report it immediately. That might involve counting, that might involve just knowing that they are always active in the morning, evening, or at lunchtime. It’s totally different for everyone, and it’s all just about understanding your own baby’s movements.”

On knowledge as power

“The subject of preventing stillbirth was really taboo back then and actually, it still kind of is. You have to be careful about how you address it, because you really don’t want to scare women and a lot of pregnant women in particular just don’t want to hear about it. But whilst we’re pregnant and even beforehand, we hear about all kinds of other things like cot death and, given that stillbirth is 10 times more likely to happen then cot death, we really should be giving women a breadth of information. Our aim at Kicks Count is to provide this information in a gentle, guided way that won’t put someone off listening. We truly believe that knowledge is power.”

On changing the conversation

“Over the years, the conversation around stillbirth has changed massively. I think it has to do with people sharing more stories about stillbirth and wanting to talk about their lost baby, whereas before it felt that people were shying away from the conversation. I do think that the amount of information that people are given now – through leaflets at the hospital and things like that – is changing too, so it’s definitely heading in the right direction. You’ve also got high profile celebrities talking about it and of course the rise of social media helps too, because people are always ‘on’ and have constant access to information. We share as much as we possibly can through social media because it feels like a great way to get the message out to mums directly.” 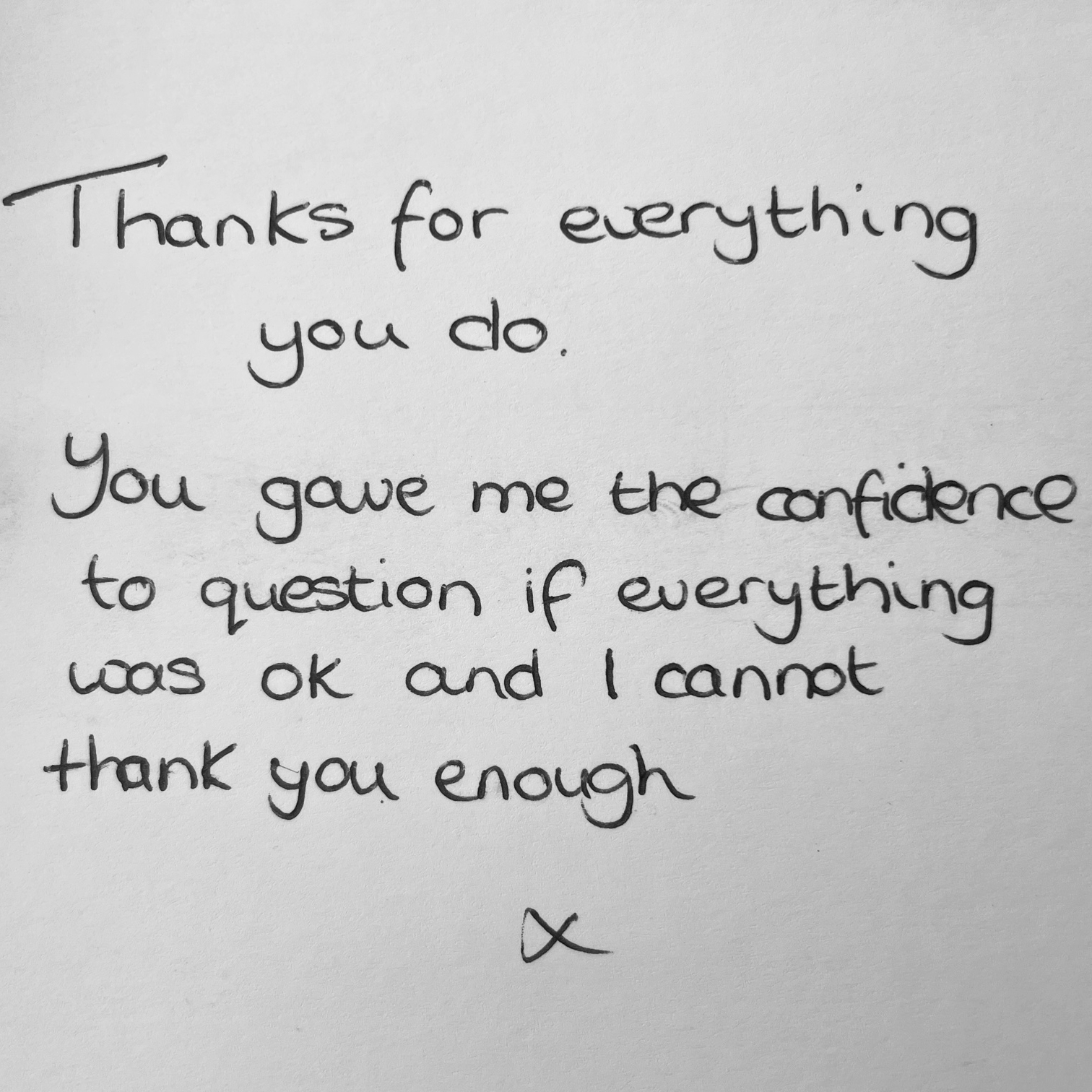 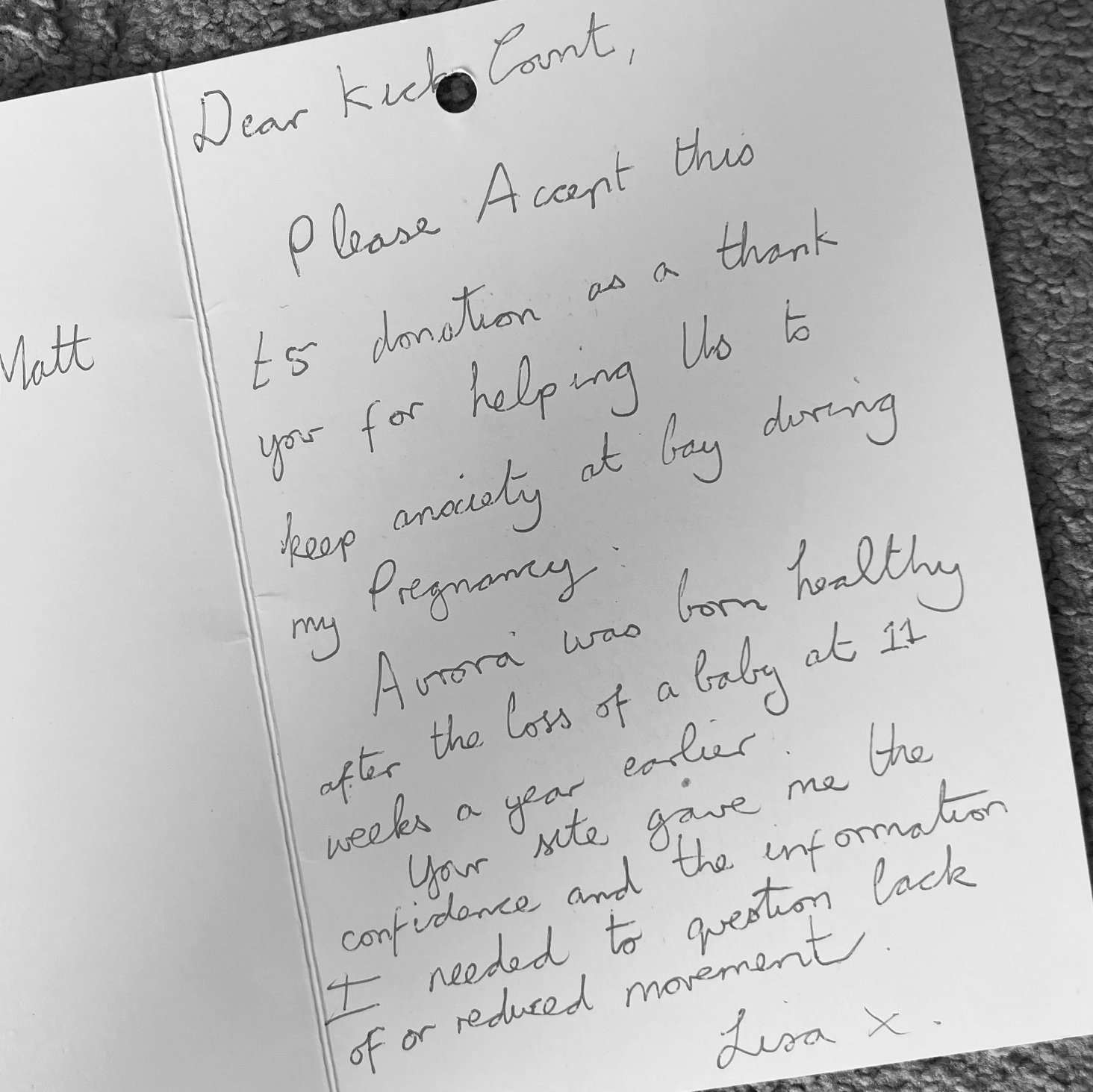 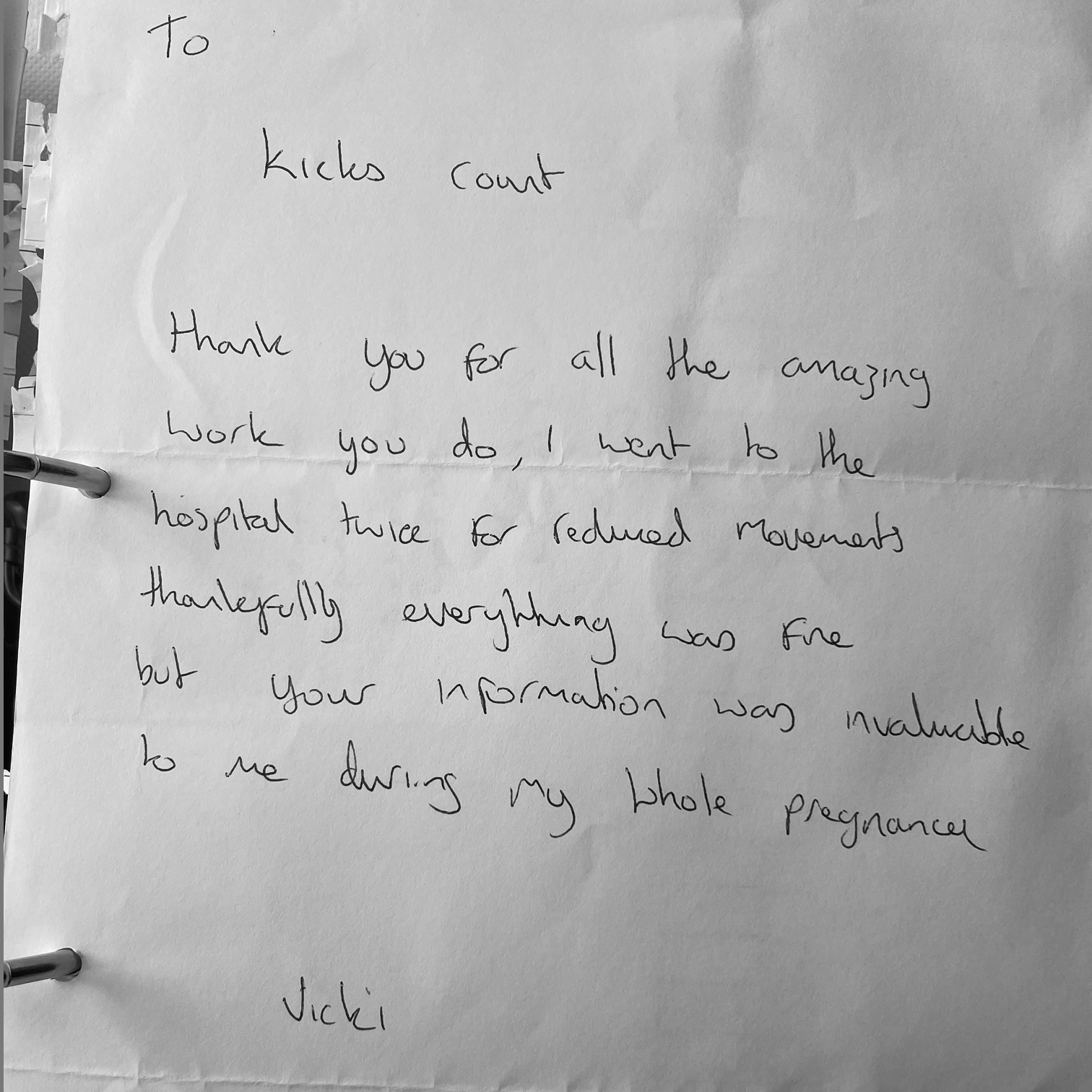 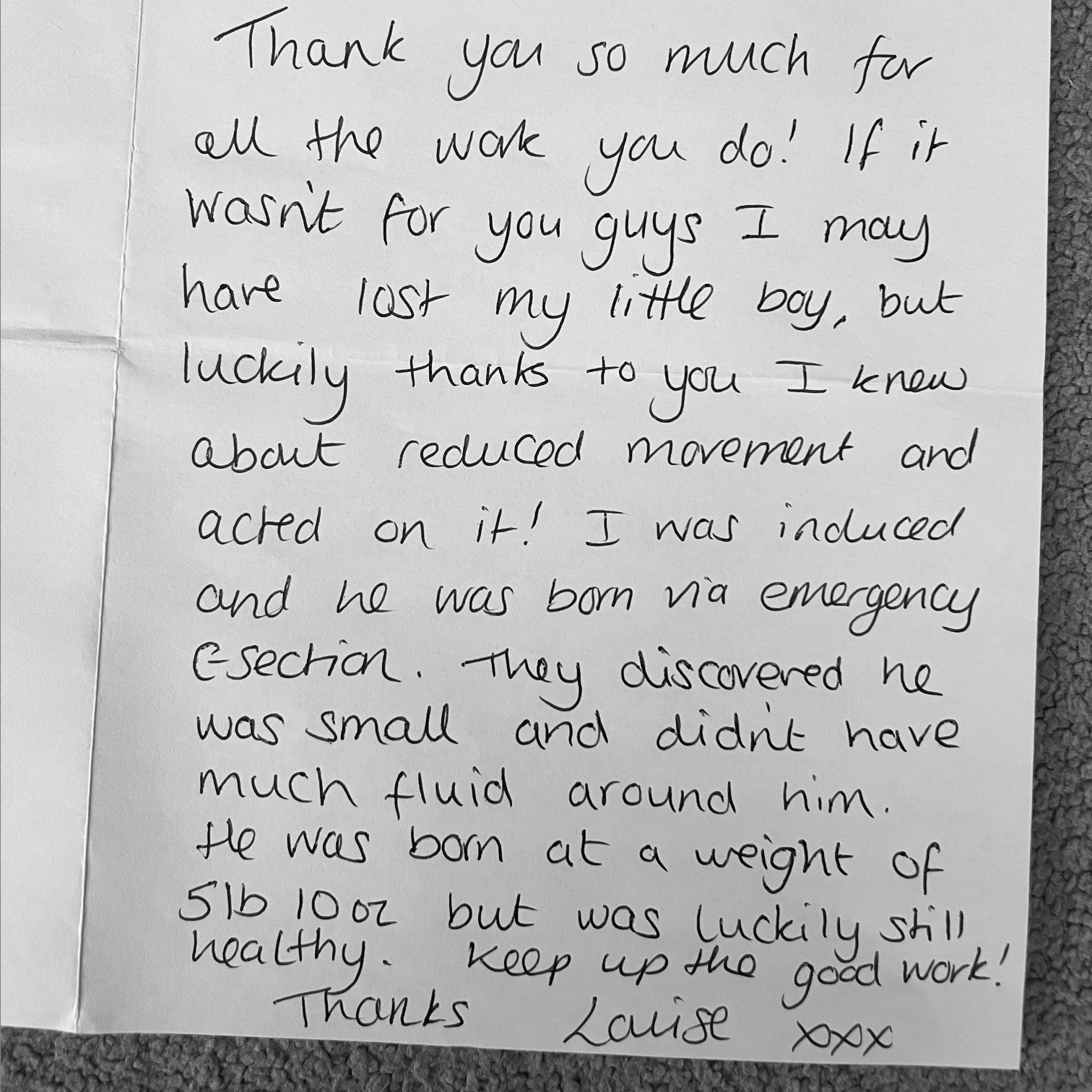 Some of the incredible letters from grateful parents, received by Kicks Count.

On listening to your body

“We want people to understand that if your baby’s movements are slowing down, there could be something wrong. People are often worried about going into their antenatal unit or calling their midwife because they think they’re being a burden. But I’ve never met a midwife who hasn’t said that she would rather see the same woman 100 times and give her the reassurance she needs, than to see her once and give her that terrible bad news. It’s an awful experience for every single person involved and of course nobody wants it to happen. Remember: the midwives are there whether you go in or not – they aren’t having to go into work just because you’ve called up. You are never a burden.”

On empowering parents to go with their intuition

“Our tagline is ‘empowering mums-to-be with knowledge and confidence’ and that is so important because a mum’s instinct is so strong. Having the confidence in your judgement is key; through pregnancy, through motherhood, through life. It’s about trusting your instincts: if you think that this is the right thing to do, or if you’re worried, then go and get checked. Trust that instinct, even after you’ve had the baby as well. You get advice from every direction and so trusting yourself is really important and really valuable. The mother’s intuition is a very real thing.”

On getting through her hardest moments

“Nothing I do now would have happened if I hadn’t lost Toby. And when I got the cancer, I knew that I’d been through something before and got through it, so I could do it again. Toby helped me gain a passion for raising awareness and now I can raise awareness of breast cancer as well as Kicks Count. If I got the option, I would not change a thing. When I lost Toby, I had no idea how I was ever going to get through it. But slowly, every day got a little easier. And when it did, that’s when I decided to do something that would make a difference. So when I got cancer I thought, I’ve just got to get through this bit. Truthfully, I don’t think anything was as bad as being told that Toby didn’t have a heartbeat. Hearing those words were far worse to me than hearing them say ‘yes, it’s cancer’. So going through what I went through with Toby definitely made a difference to how I went through my treatment with cancer.” 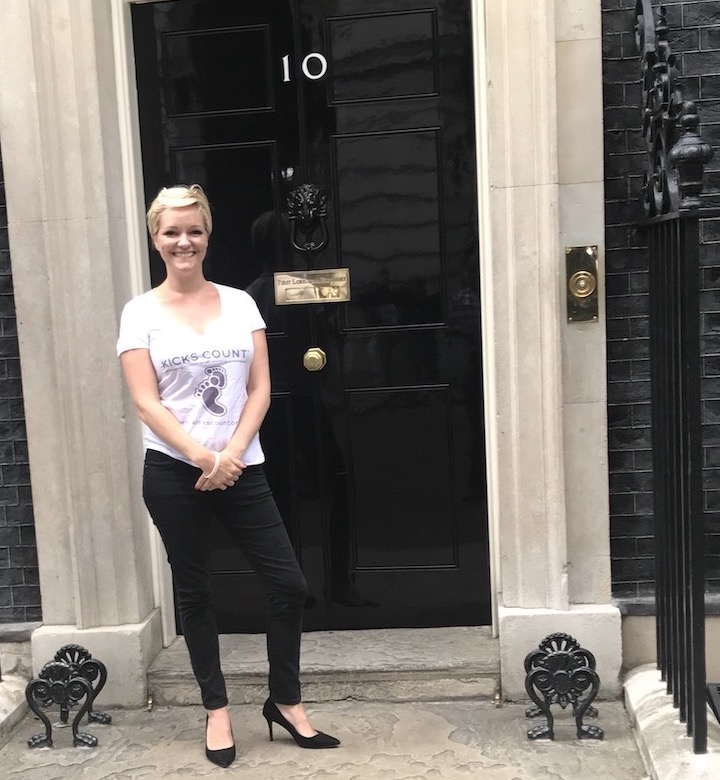 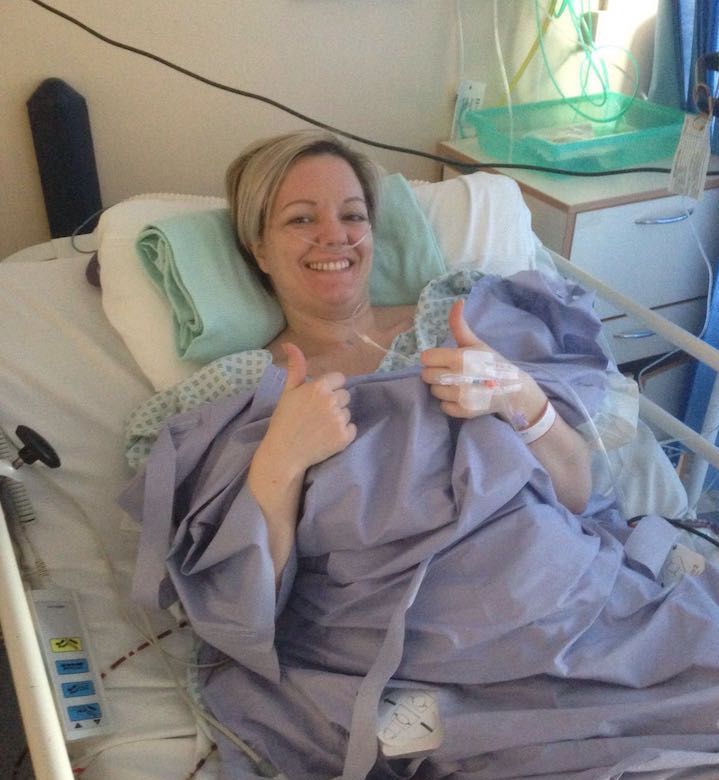 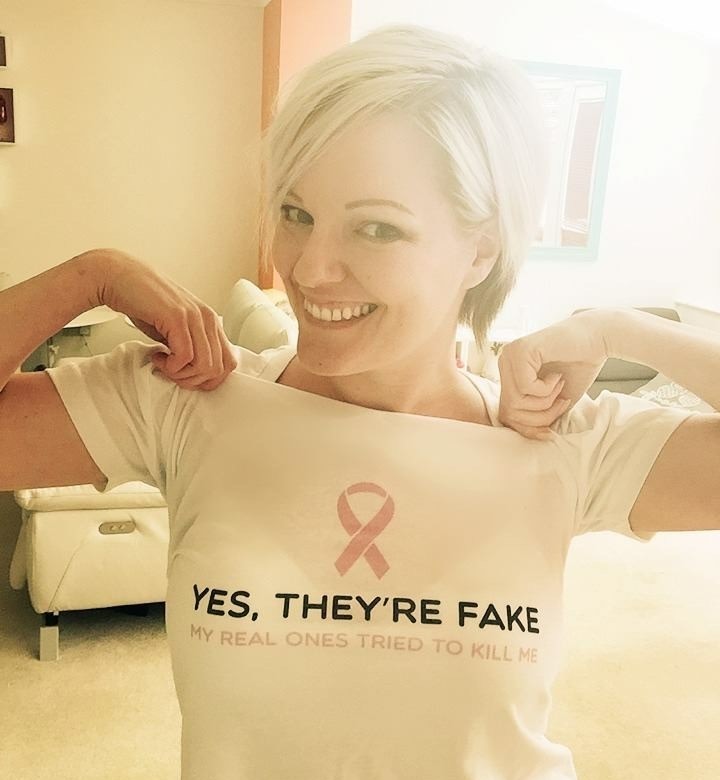 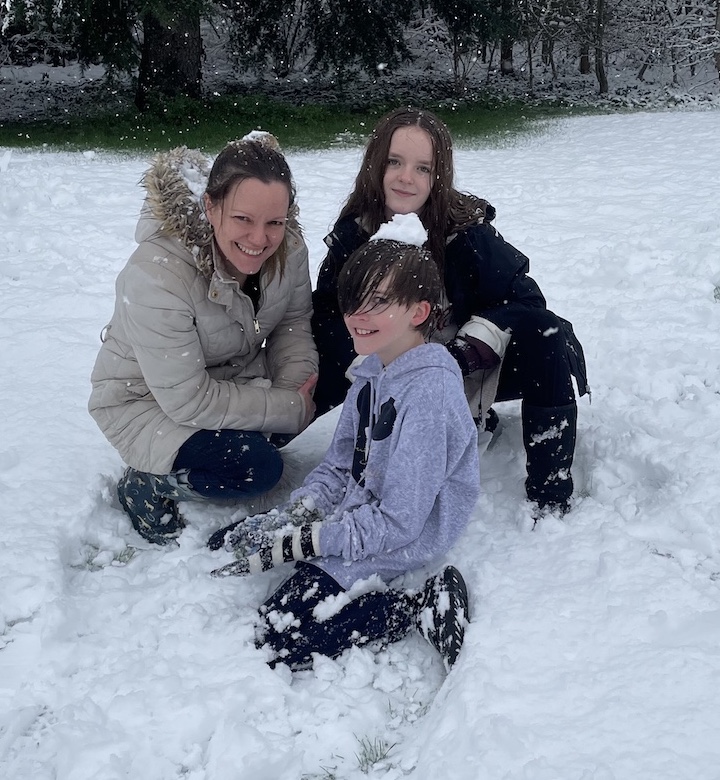 On her most important piece of advice

“Every pregnant woman in this country will be given a maternity number, which is usually the maternity unit at the hospital where there are midwives 24 hours a day. That’s the number you call if you think there’s something wrong – even if you’ve got a midwife appointment the next day. One of our biggest messages is to not sleep on it; if you notice something at night, call them. If you notice something at 2am, call them. Don’t wait until 10am the next day or go to sleep. If you can’t find the number, call 111. It’s all about immediate action.”

“A lot of people say that if you save one baby, it’s worthwhile. But I think, if we could have saved one baby, it could have been my baby. Our message has to save a lot of babies, and then I will feel like it’s been worthwhile. Because if it was going to save just one, why did I have to lose my baby? So far, we’ve helped save hundreds of babies and to me, that’s such a worthwhile and important legacy for Toby to have left.”